Interim Dean of the Wake Forest University School of Divinity, Wake Forest Professor of the Humanities, and Director of the Program in African American Studies

A scholar committed to a broad and inclusive vision of human flourishing, Corey D.B. Walker is Interim Dean of Wake Forest University School of Divinity, Wake Forest Professor of the Humanities, and Inaugural Director of the Program in African American Studies. 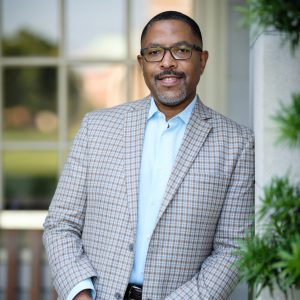 Dean Walker has an extensive record of scholarly accomplishment and academic leadership. He served as Vice President, Dean, and Professor of Religion and Society at the Samuel DeWitt Proctor School of Theology at Virginia Union University; founding Dean of the College of Arts, Sciences, Business and Education and inaugural John W. and Anna Hodgin Hanes Professor of the Humanities at Winston-Salem State University; and Chair of the department of Africana Studies at Brown University, where he was also a tenured professor and faculty affiliate in the department of American Studies, department of Religious Studies, Center for Latin American and Caribbean Studies, Center for the Study of Race and Ethnicity, and Committee on Science and Technology Studies. He served as a faculty member in the department of Religious Studies and the Carter G. Woodson Institute of African American and African Studies at the University of Virginia and was the inaugural director of the Center for the Study of Local Knowledge established by the Carter G. Woodson Institute, with support from the Ford Foundation, as the only research center in the country dedicated to new and innovative research related to the concept of local knowledge. Dean Walker also served as a visiting professor at the Historisches Institut at Friedrich-Schiller Universität Jena in Germany, where he delivered the Johann Gustav Droysen Lecture, University of Richmond, and Union Presbyterian Seminary. He was Freedom Forum Institute Senior Fellow for Religious Freedom at the Freedom Forum Institute in Washington, DC and Non-Resident Fellow at the W.E.B. Du Bois Institute for African and African American Research at Harvard University.

Dean Walker’s research, teaching, and public scholarship spans the areas of American and African American social and religious thought, ethics, and religion and American public life. He is author and editor of several books and has published over sixty articles, essays, and book chapters in a wide variety of scholarly journals and publications. He is currently completing his next book, Disciple of Nonviolence: Wyatt Tee Walker and the Struggle for the Soul of Democracy, to be published by the University of Virginia Press. Dean Walker also served as Book Review Editor and Associate Editor of the Journal of the American Academy of Religion, generally considered the top academic journal in the field.

An ordained American Baptist clergyperson, Dean Walker speaks to congregations and communities across the nation and has appeared on a variety of media outlets in the United States and abroad.