Sally Ann Morris honored as fellow of the Hymn Society 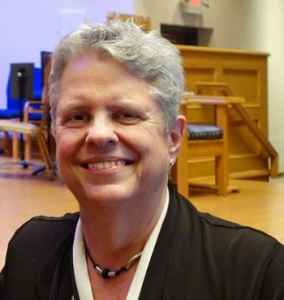 Sally Ann Morris has been honored by The Hymn Society in the United States and Canada during its all-digital Annual Conference on July 15 by being named a Fellow of The Hymn Society (FHS). This award, the highest honor given by the organization, was conferred because of her work as a composer, song enlivener, festival creator, infectious ambassador for the world of congregational song, and for her service to The Hymn Society.

Sally comes by her musical gifts naturally. Her maternal grandfather learned piano building at Steinway in New York City; after moving to North Carolina, he and her maternal grandmother owned a piano and organ dealership. Her father was a string bass player who performed professionally with the Winston-Salem Symphony Orchestra. Sally herself began singing in church at age five, out of the “old red” Presbyterian hymnal. As she embarked on piano lessons, she practiced by sight-reading through the hymnals her father would “boost” from churches whose pianos he tuned.

Sally began exploring her gifts as a composer in junior high school, winning a composition contest for ninth graders. She subsequently attended St. Andrews Presbyterian College in Laurinburg, North Carolina, earning a Bachelor of Music degree in applied voice in 1975, after which she pursued graduate study in composition at West Virginia University in Morgantown, West Virginia. Upon returning to North Carolina, she helped form a musical ensemble, the Piedmont Chamber Singers; taught piano; served as a church musician in multiple short-term positions; and plied a variety of odd jobs including being a chauffeur, a courier, and a seasonal UPS driver—brown uniform and all!

If the “old red” Presbyterian hymnal of the 1950s fostered Sally’s earliest church singing, the “blue” Presbyterian hymnal of 1990 had an even greater impact on her life. Through it, she remarks, she “became aware that living hymn tune composers existed.” She was soon to join their ranks. In 1990, she received her first commission: to write a hymn tune for the 100th anniversary of Augsburg Lutheran Church, Winston-Salem, North Carolina. The same year, she attended her first Hymn Society conference, and won the first three national hymn writing contests she entered. This accomplishment gained her an invitation from Carl P. Daw Jr., FHS, then Executive Director of The Hymn Society, to present a plenary showcase as an “Emerging Writer” at the conference in 1996, by which date three of her tunes had been published for the first time in a denominational hymnal, The New Century Hymnal (1995).

A lifelong Presbyterian whose works have gone on to appear in the hymnals of many denominations, Sally credits her years of serving in a Roman Catholic parish (St. Paul the Apostle Catholic Church in Greensboro, North Carolina) with broadening her repertoire as a composer. Among artists currently active in the world of congregational song, she is among the most eclectic and exciting: in addition to composing in classical melody-only and four-part genres, she writes equally fluently in folk/pop/rock styles, jazz, Latin dance, and short song forms using ostinato chants and rounds. Her hymn tunes, songs, and choral anthems include three collections, published by GIA Publications: Giving Thanks in Song and Prayer (1998), To Sing the Artist’s Praise (2009) and Spread the Good News (2016). She has also participated in numerous GIA-sponsored recording projects.

In 2016, Sally left church work to focus on a new position as Musician-in-Residence at the Wake Forest University School of Divinity, Winston-Salem, North Carolina. There, she applies her gifts to leading weekly chapel services and helping seminarians learn how to use music meaningfully in crafting coherent worship. Her heart, indeed, is with the worshiping congregation, whom she often “sees” singing her compositions long before she ever puts notes to the page.

This news release is provided by The Hymn Society.

This information was prepared by Mary Louise Bringle, FHS, and is provided for release by J. Michael McMahon, Executive Director of The Hymn Society in the United States and Canada, 5 Thomas Circle, NW, 4th floor, Washington, DC 20005-4153. For more information, please contact Dr. McMahon at mike@nullthehymnsociety.org or 800-843-8966.

Founded in 1922, The Hymn Society in the United States and Canada is an ecumenical organization of people who are passionate about hymns and congregational song. The Hymn Society community, open to all, is made up of scholars, church musicians, poets, composers, choir directors, choir members, clergy, worship planners, song leaders, music publishers, music educators, and people who love to sing. We believe that the holy act of singing together shapes faith, heals brokenness, transforms lives, and renews peace. Our mission, therefore, is to encourage, promote, and enliven congregational song.