Earlier this year, the American Schools of Oriental Research (ASOR) announced that Dr. Katherine A. Shaner, assistant professor of New Testament at the School of Divinity, was the 2017 recipient of the William G. Dever Fellowship for Biblical Scholars. The fellowship sponsors field archaeology and research in Israel to help foster a dialogue between archaeology and biblical studies in colleges, universities, and seminaries.

This summer, Dr. Shaner has been participating in the Omrit Settlement Excavation Project. In addition to the dig component,  she also has the opportunity to complete research at the W. F. Albright Institute of Archaeological Research in Jerusalem.

Dr. Shaner sent the School of Divinity the following report from the field:

Along the ancient Roman road,

about half way between Tyre on the coast and Damascus at the crossroads of trade in the region, is a little-known place called Omrit (see an overview here). While there is little mention of the site in ancient literary records, Mark 8:27 notes that Jesus and his followers went to “the villages of Caesarea Philippi.” It is possible that this place we now call Omrit was one of those “villages.”

Located at the top of a hill between two wadis (seasonal rivers), Omrit would have been a good stopping point just before travelers began their climb into the Golan mountains that separate modern-day Israel from Syria. American archaeologists have been excavating at this site since 1999 and have uncovered a temple complex that rivals any other Roman imperial temple in the region. This summer I was part of the excavation team that excavated in the settlement near the temple. My teammates and I dug through four centuries of dirt, pondering how and why each layer came to be and what stories the stones, pottery, glass, walls, pipes, and other human made things in that dirt might tell us about Omrit’s past. We knew some things, for example, we knew that our earliest remains might be a late-first century CE housing complex (see a description of last year’s finds here). We did not expect to find a place for grain storage from the late-fourth century CE. We did not expect to find a drain channel from the late-second century CE (see the picture of me with my hand on rocks). 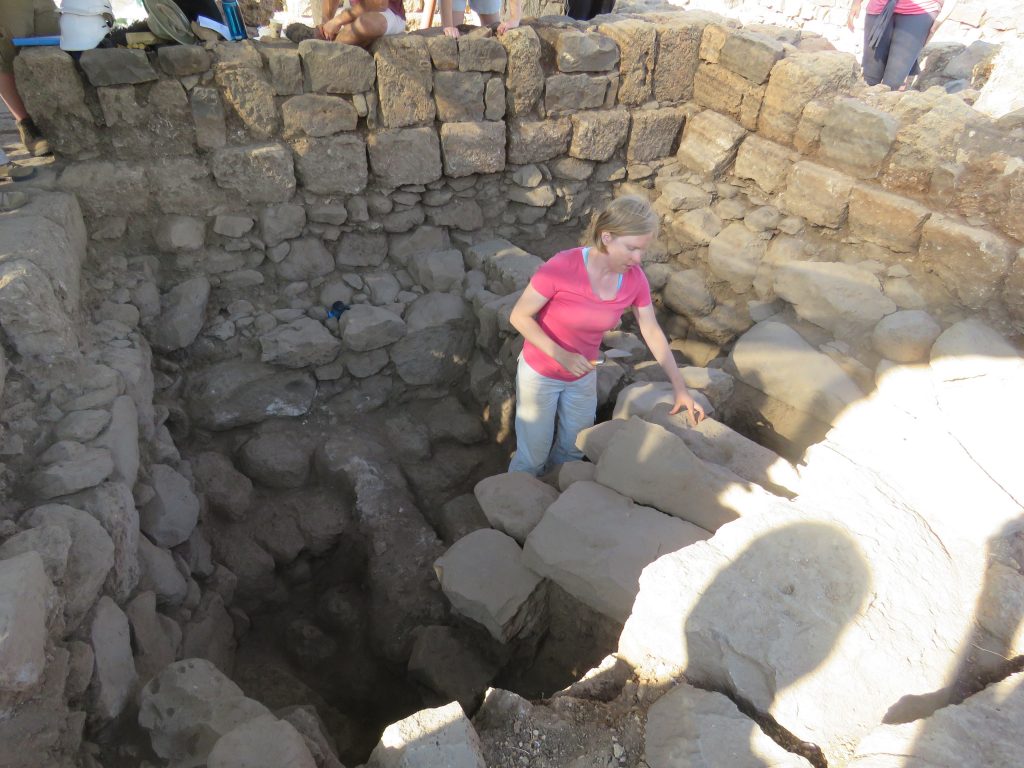 So much for the nerdy stuff. Excavating things is really, really, really hard. I mean, you have to get up at 4:30am, eat a quick peanut butter sandwich (otherwise starvation WILL ensue), and be ready to swing a pick-axe by 5am (see picture of me with a pick-axe). Our 5-person team was assigned to Square K20, which was a 30 x 30 foot section of the site that we leveled slowly, inches at a time, looking for clues about building, re-building, usage, floors, walls, etc. Every bit of dirt we dug we put into buckets and sifted for pottery, bone, metal, glass, and other kinds of evidence of ancient life. But, in all honesty, the dirt was the easy part. These Roman builders used giant hunks of heavy basalt stone to construct their walls, all of which fell into our square when the settlement was destroyed. That means that I often spent my early mornings heaving boulders bigger than most small appliances, over my head and then carrying them off to another part of the site. We did this until about 11:30am with a coffee break at 7am and second breakfast at 9:30am (no, there were no hobbits helping us). Also, it was in the 90’s by 8am. Sweat, dirt, sunblock usually formed a nice pasty, protective layer on every exposed part of my skin. On the upside, this “mud wrap” was fantastic at preventing sunburn! 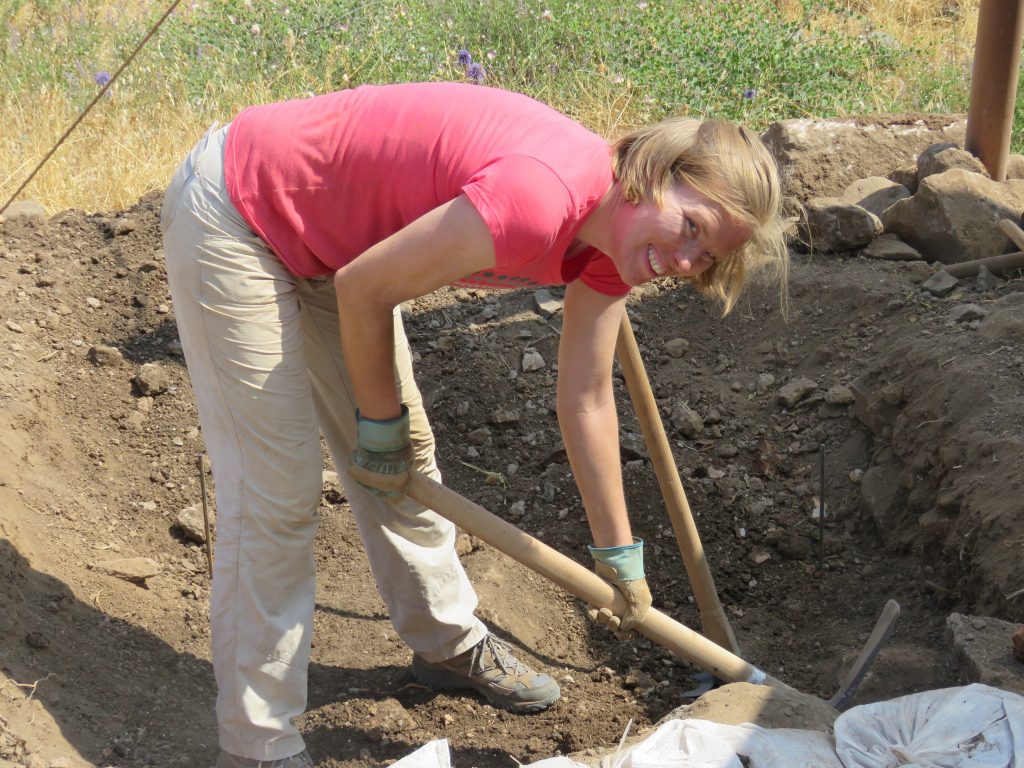 So why does a New Testament scholar, whose job it is to interpret a set of 27 texts that haven’t changed much in 2000 years, subject herself to think kind of physical labor in a place no one has ever heard of? Because these texts, and the first people who read them, and even those who followed Jesus but had never encountered a text about him all have a material context. The words on our biblical pages are not just ethereal concepts. They emerge from farms and workshops that press the papyrus into paper. The ink is mixed in pottery and glass with oils and dyes that come from agricultural production centers. These texts were stored and transported along trade routes where olive oil, wine, and grain were distributed. Perhaps most importantly, the people whose faith is part of the story of the earliest Jesus followers lived in cities, towns, and villages. They lived in a particular place with particular local customs and social networks. We may never know their theological analysis of the second person of the trinity, but we can know some things about the material stuff of their lives. That material stuff shapes the theological imagination. As we puzzle together their material world, we are lucky enough to get even a passing glimpse at the richness of that imagination.