Celebrating the Class of 2016

The School of Divinity held two ceremonies honoring graduates, a hooding ceremony on Saturday, May 14, and a diploma ceremony following Commencement on Monday.

Watch the hooding ceremony »The hooding ceremony, planned by members of the class of 2016, used imagery that recalled how the class had begun their time together at the School of Divinity.  A dominant image of the service was their experience of standing on holy ground. Student music ensemble, Lift Every Voice, and liturgical movement group, Amazing Grace, contributed to the service with powerful offerings of music and dance.

The class selected Jill Crainshaw, Blackburn Professor of Worship and Liturgical Theology, to be the hooding speaker. In her remarks, based on the story in Genesis 32:24-31 in which Jacob wrestled by the River Jabbok, she offered graduates a blessing.

“You’ve learned something here, passing by this way, that has gotten you ready to hold vigil with someone else through the night and taught your feet to have joy enough to dance when they arrive home in the morning,” she said. “There are wounded hearts and broken spirits out there. Ministries to be done. Lives to be held. Love to be given. Life to be shared. You have learned something about what it means to look into the face of others and see the face of God. We need you to go out and make the world a place where people can see the face of God in the one most other than them. Go. Find another river and know that God holds you by the Jabbok.”

During the ceremony, Gail R. O’Day, Dean of the School of Divinity, made the following recognitions:

University Provost Rogan Kersh was also present and recognized Professor E. Frank Tupper on the occasion of his retirement for “combining intellectual honesty with theological passion and shaping the School of Divinity as one of the founding faculty.” After 19 years of service at Wake Forest, Tupper received his citation as Distinguished Professor of Divinity Emeritus.

Watch University Commencement »At Monday’s university ceremony keynote speaker Eboo Patel, founder and president of the Interfaith Youth Core, framed his remarks to all graduates on the opportunities that their education creates by telling a story about the early life of musician Louis Armstrong and the birth of jazz. When Armstrong’s sheet music fell off the stand during a recording session, he didn’t stop, but instead improvised and sang a string of rhythmic nonsense, now known as scat, thereby creating a new musical form. Patel, who served on President Barack Obama’s inaugural Faith Council, told the graduates there can be missteps when you improvise.

“Your education has given you the eyes to read the road signs along way the way and the ability to change direction when the original plan goes sideways,” he said. “There is something to be said for reaching milestones you set for yourself. There’s a lot more involved in re-charting your course when you miss them.”

Watch the Diploma Ceremony »At the School of Divinity’s diploma ceremony that immediately followed the all-University festivities on Hearn Plaza, Dean O’Day invited graduates, referencing John 2:1-11, to be the abundance that the desperate and hurting world so needs.

“Who would begin their ministry – first days on the job – by doing something so extravagantly abundant, so overwhelming good, so overflowing with love?” O’Day continued. “Our hope, prayer and confidence, Class of 2016, is that you will do all of these things because you have accepted the invitation to taste the good wine. You each and all, as individuals transformed by community, will go from here and be the abundance for which the world thirsts. Begin your ministries by being the love of our extravagantly loving God and gladden all hearts with wine.”

Congratulations to the Class of 2016! 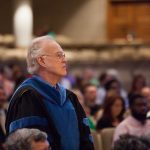 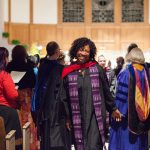 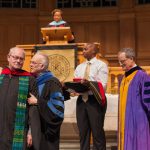 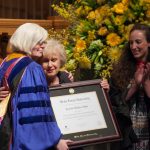 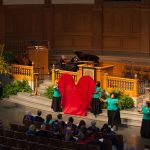 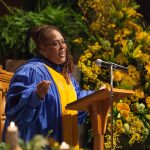 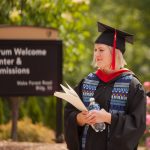 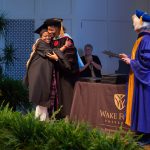 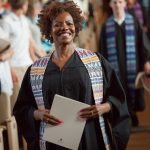 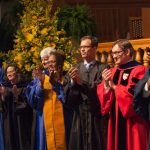 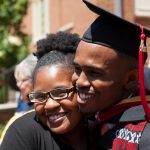 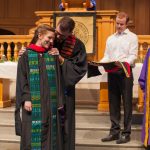 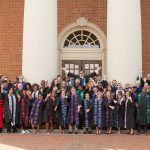 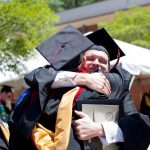 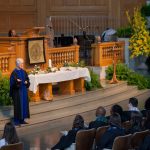 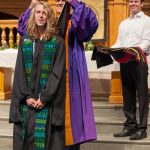 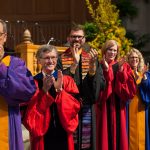 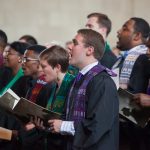