Dr. John Barrow, Professor of Mathematical Sciences in the Department of Applied Mathematics and Theoretical Physics at the University of Cambridge, will deliver a public lecture on Tuesday, March 29 at 7:30 p.m. in Wake Forest University’s Porter Byrum Welcome Center.

Titled “Our Place in the Universe,” Barrow’s lecture will explain the concept of the expanding universe and modern evidence for it, taking seriously the idea of a multiverse of universes. He will also reflect on what the observed acceleration of the universe’s expansion today signals about the future. Barrow notes, “It may well be that astronomers in the far future will not be able to study the universe by direct observation as we do today. Our own place in cosmic history is one that is advantageous for arriving at an understanding of the universe and our place within it.”

In 2006, Barrow received the Templeton Prize for his insights from mathematics, physics, and astronomy that challenged scientists and theologians to cross boundaries of their disciplines in order to fully realize what they may or may not understand about how time, space, and matter began, the behavior of the universe, and where it is all headed, if anywhere. Established in 1972, the Templeton Prize honors those who make exceptional contributions to affirming life’s spiritual dimension, expanding the global vision of human purpose, ultimate reality, and the many and diverse manifestations of the Divine.

From 2003 to 2007, Barrow also served as the Gresham Professor of Astronomy at Gresham College in London, a position once held by Sir Christopher Wren. Founded in 1596, it is the world’s oldest science professorship. Barrow’s published works include The Book of Universes: Exploring the Limits of the Cosmos (W.W. Norton & Company, 2012), 100 Essential Things You Didn’t Know You Didn’t Know: Math Explains Your World (W.W. Norton & Company, 2010), and The Book of Nothing: Vacuums, Voids, and the Latest Ideas about the Origins of the Universe (Vintage, 2002).

Barrow’s lecture is made possible by the “Science for Seminaries” grant received from the American Association for the Advancement of Science (AAAS). The grant program seeks to bring science and religion together for conversation. Read more about the School of Divinity’s grant program at divinity.wfu.edu/science. 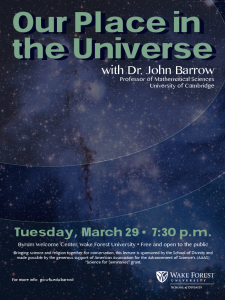 “As one of the foremost cosmologists of our time, Dr. Barrow has not only expanded our scientific understanding of the universe but also offered deeper reflections on how this understanding could lead us into religious questions about ultimate concern and meaning,” said Kevin Jung, Associate Professor of Christian Ethics and Project Leader of the AAAS Grant at the School of Divinity. “His wide-ranging engagement with aesthetics, history, philosophy, music, and theology beyond astronomy and physics is just the kind of integration of knowledge that the AAAS and School of Divinity seek to promote through this science grant.”

This lecture is free and open to the public. Seating is limited and available on a first-come, first-served basis. Parking is available in two lots – S1 and S2 – which are both adjacent to the Byrum Welcome Center on Wake Forest’s campus.