Winston-Salem, N.C. — When Wake Forest University graduate students Maria Nkonge (‘16) and Ashley Escoe (‘16) decided to apply for the joint Master of Divinity (MDiv) and Juris Doctorate (JD) degree program with Schools of Divinity and Law, both knew they had been called to a vocation that was people-centric. They each agree that the four walls of the church is not the only place where works of faith are found.

“Everyday we are informed by our desire for justice,” Nkonge said, “and someone’s life will always be affected by my work.”

After interning with the 13th Prosecutorial District Attorney’s Office in eastern North Carolina, where she assisted with domestic violence cases, Nkonge decided to put her experience to practice and compete for a seat on the School of Law’s National Trial Team. More than 100 students tried out, delivering closing statements for a mock murder trial.

“I was interested in the National Trial Team because of my fear of public speaking,” Nkonge said. “I have been putting off trying out for speaking engagements, but after interning with the District Attorney’s Office, I was able to see how much change can result from the work of a litigator in the courtroom.”

After a rigorous and difficult selection process, given the talent of students who tried out, Nkonge was selected as the sixth seat on the Wake Forest team. Under the coaching and mentorship of local attorneys, Nkonge joins five other law students who will compete against other law schools in the nation to be exposed to the nature of trial practice and strengthen their advocacy skills. 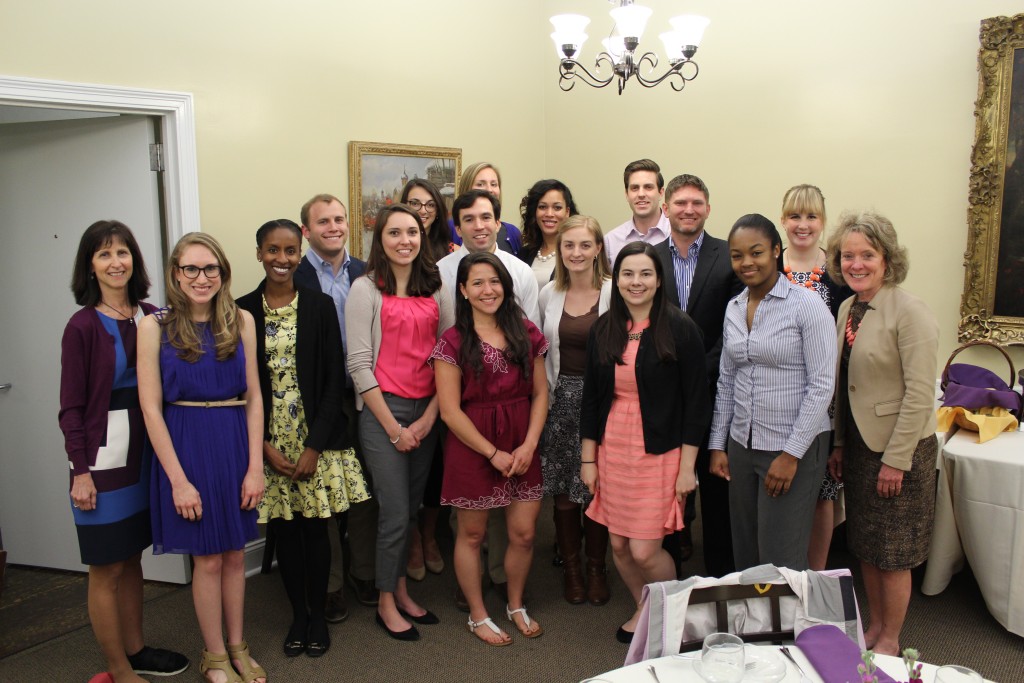 After graduation in 2016 with her law and divinity degrees, Nkonge hopes to work in a vocation related to faith and health, specifically end-of-life planning, health care power of attorneys and living wills.

“There’s a fear related to people wanting to talk about their lives and needs,” she said. This summer Nkonge will be working at Wake Forest Baptist Health’s Downtown Health Plaza to aid in establishing an advanced directive initiative, assisting hospital administrators and general counsel. She will have financial support from the School of Divinity’s Specialized Summer Internship program, offered through the school’s Art of Ministry program with the aid of a grant received from the Lilly Endowment Inc.

“Maria is a global citizen,” Jensen said. “Seeing the health disparities in Nicaragua between north and south, rich and poor, reinforced a sense of who she was and what she wants to work for.”

As a student, Nkonge has served on the team awarded first place during the Third Annual Maya Angelou Center for Health Equity (M.A.C.H.E) Bowl, a multidisciplinary competition for solving hypothetical health care situations, interned as a chaplain at Forsyth County Jail and Prison and received certification from the University’s LGBTQ Center as a Safe Zone Trainer and Counselor.

Ashley Escoe says that the joint JD and MDiv degrees are connected by a focus on justice and service. Escoe hopes to be bi-vocational, serving in a local church as well as practicing law. She seeks to serve in the public-interest field with an organization such as the American Civil Liberties Union (ACLU) or work with a law firm to provide needed legal services to those in her community.

“At the School of Divinity, I have been reflecting on the essence of my faith and what I believe, while at the School of Law, I have been able to dig further into the foundations of how lives are impacted by laws and the justification of our actions.”

She sees a need for an authentic understanding of how to connect with people where they are instead of where we think they should be.

This year Escoe was elected as the co-executive online editor of the Wake Forest Law Review. The law review’s online presence is growing, Escoe says, and she wants to continue that momentum. Of her different responsibilities, she is most excited about maintaining the Fourth Circuit blog and publishing Common Law Articles on theWake Forest Law Review’s website.

The Fourth Circuit blog consists of daily summaries of opinions by the Fourth Circuit, the federal appellate court for Maryland, West Virginia, Virginia, North Carolina and South Carolina. Escoe would like to see this blog become the “go to” source for practitioners in the Fourth Circuit to keep abreast of what the court is saying. Articles published on Common Law concern the intersection of current events and the law.

“While in Divinity School, I began to realize how much the law impacted the social justice issues we discussed,” she said. “Being in law school has further confirmed that the law touches all aspects of our lives. Through reading and editing the Common Law articles, I look forward to learning about a variety of areas of law and the role it plays in current hot button topics.”

Whatever career path Escoe takes will involve dynamic writing. Working on The Wake Forest Law Review will help her enhance skills related to clear, audience-specific writing, as well as being aware of effective uses of social media.

Professor John H. Knox, U.N. Special Rapporteur on Human Rights and the Environment and Henry C. Lauerman Professor of International Law, says, ”Ashley is a superlative student in many ways, and she is an exceptionally gifted advocate. This winter, she and her teammates won first place in the United States in the Stetson International Environmental Law Moot Court Competition, and Ashley received the award for best oralist.” 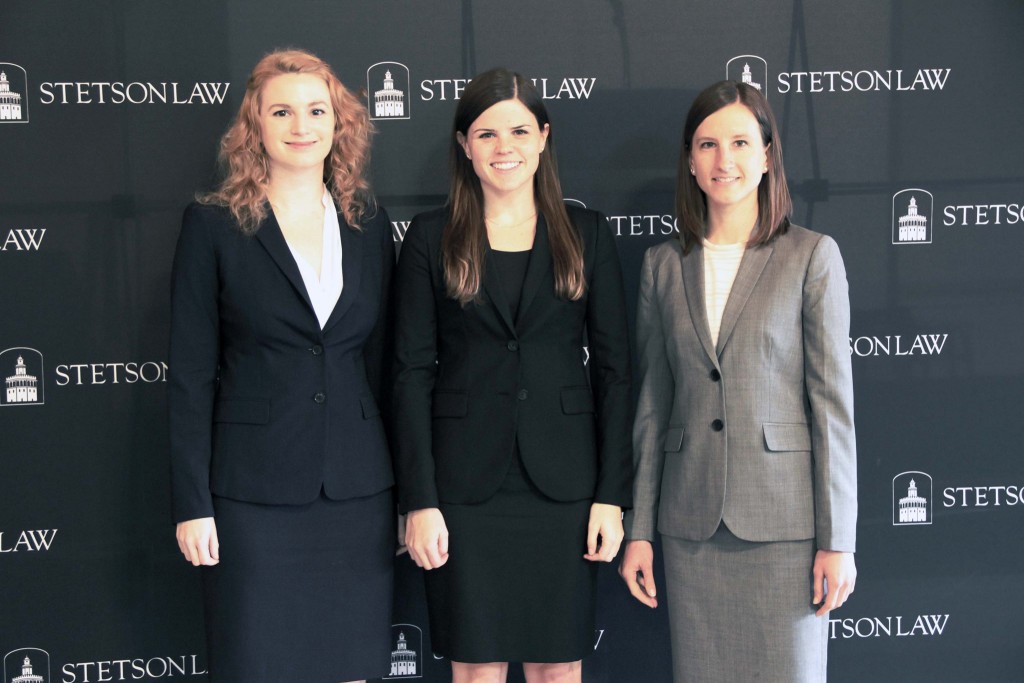 While a student, Escoe has worked with ministry leaders at the Via Faith Community in Winston-Salem with their visioning process for the future of the congregation; served as an intern with the Baptist Joint Committee for Religious Liberty, an educational and advocacy organization that is a leading national voice for religious freedom; participated in Moot Court, where law students draft briefs and give oral arguments for both sides of a hypothetical case; and volunteered with the Pro Bono Expungement Clinic interviewing clients to determine which, if any, criminal charges can be removed from their record.

“Both degree programs emphasize the importance of giving back to the community,” Escoe said. “There are people in need all around us. The joint degree has given me tools to help meet some of those needs, whether spiritual, legal or some combination of the two.”

The joint JD/MDiv degree is a five-year program that equips students for creative leadership in advocacy and activism by interconnecting studies in law and religion. Together the schools uniquely model an interdisciplinary conversation for the larger University by exemplifying what it means to be Pro Humanitate. The service of public leaders in the religious and legal realms are interconnected simply because the work of the two consistently strives for the well-being and flourishing of others.

“By integrating vocational perspectives from law and religious leadership, Maria and Ashley are making their mark well beyond Wake Forest and Winston-Salem,” said Michelle Voss Roberts, associate dean for academic affairs at the School of Divinity. “Their accomplishments are testaments to the creative ways that our joint degree students are responding as agents of justice, reconciliation and compassion to the world’s needs.”

Wake Forest Law Interim Dean Suzanne Reynolds (‘77) said, “This unique joint degree has attracted uniquely gifted students. Ashley celebrated the end of her second year in law school by interrupting exams for her service of ordination. Maria will spend the summer after her second year of law school creating and running a program to enable low- and no-income residents of the community make their advanced directives. Both of these young women illustrate what can happen when schools share their programs with gifted people attracted to both.”